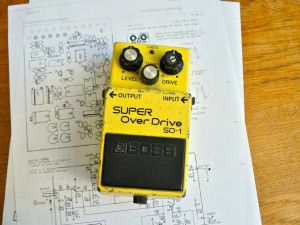 I’ve got this old made in Japan Boss SD-1  on eBay. 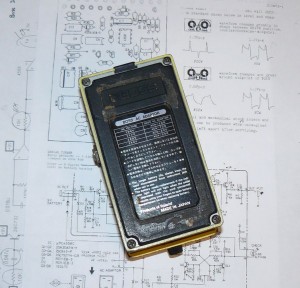 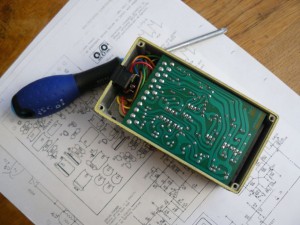 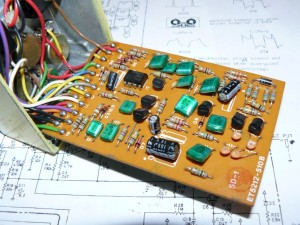 The SD-1 schematic is close to Ibanez TS808′s one. But close does not mean “identical” ​​… some components differ in values, and the clipping is asymmetric on the SD-1 : 2 diodes in series on the one hand, a diode on the other, these two sets mounted in the opamp feedback loop. The pedal sounds a little more “harsh” than the TS808, more “marshally”… The drive at its minimum, there is less gain than with a TS808. In think it is mainly due to the 33k resistor (instead of 51k in TS808) in series with drive pot.

Here is the Boss SD-1 schematic (to be compared with TS808 schematic) : 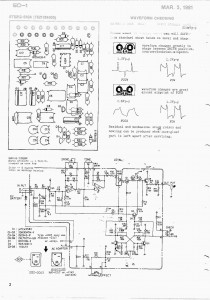 What mods for this pedal? 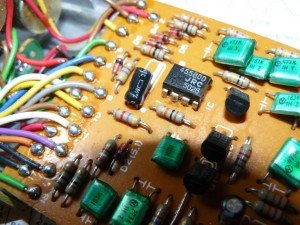 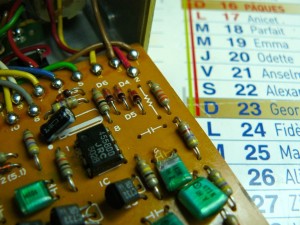 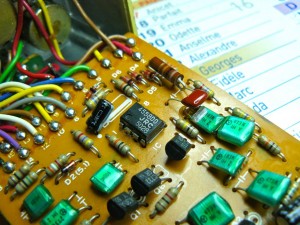 (Note : components are “glued” on the circuit board but it quite easy to remove them …) 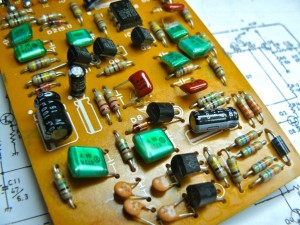 Caution : tweak of the death

I don’t have any Panasonic 0.018 uF to replace C2. Therefore, I simply remove it (and I also remove the bias resistor R4) and I shunt between the output of the transistor Q5 and the input of the opamp clipping stage. C2 usually “cuts” the DC (bias). Here, the polarization is almost equivalent (3V output transistor, 2V input of the opamp. Seeing the schematic, I would have bet on 4.5V, but hey ! we are here to rock ‘n’ roll, after all) : 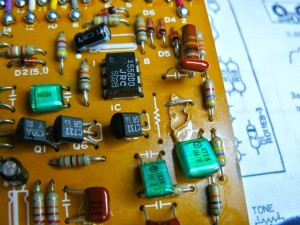 Then, I replace R7 and C7 (same values, but carbon and Panasonic) : 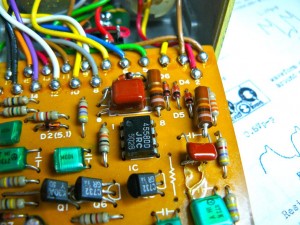 Then, replacement of R16 and C10 (carbon and Panasonic capacitor). C10 has a value of 1uF. For those who have always been amazed with the value of (awful) electrochimic 10uF at the TS808 output, it seems that Boss did not see why a value as important) : 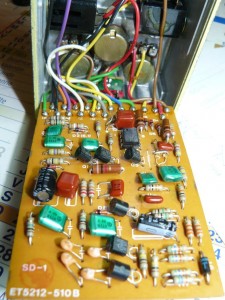 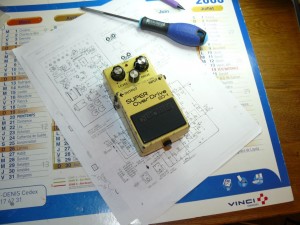 In conclusion : it sounds good, without disfiguring the pedal, and as usual, I’ll have to wait several days to try again and see if there is some “magic spot” in this pedal or not …

I think it goes well with the Les Paul (unlike the TS808 which I find muddy with HB’s) : firstly there is less gain at minimum drive level, on the other hand this pedal is a bit more aggressive than TS and that seems well suited to Gibson guitars.

Placed in front of a TS808 to emphasize a solo is also a good solution because it gives bite to the sound !

This entry was posted in Music Gear, Pedals and tagged Boss, SD-1, SD1. Bookmark the permalink.