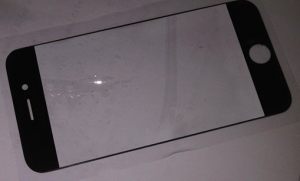 So far the rumors about a screen of 4″ for the iPhone 5 were not tangible. But now, a part supposed to be for Apple iPhone 5 seems to indicate that iPhone will have a screen of 4″ instead of the current 3.5″.

Similar to the same part of iPhone 4, it differs only by its size. It comes from a Chinese subcontractor. If this spare part is really for Apple iPhone 5, despite its size (4 inches), it still offers a resolution of 960 by 640 pixels, the same as Aple iPhone 4. But its 0.5″ extra bring considerable comfort for videos for example.

The current 3.5 “iPhone 4 becomes a handicap compared to smartphones android who adopt screen sizes from 4″ or more although the resolution of the iPhone 4 remains superior to those of larger screens.

But other phones with screens from 4″ are also beginning to have high resolution. This is the case of Motorola Atrix 4G which displays 960 by 540 pixels on its screen 4″.

This entry was posted in What's up, doc ? and tagged apple, iPhone 5, screen. Bookmark the permalink.