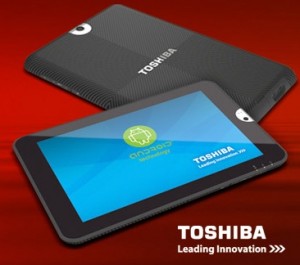 The Acer Iconia Tab A500 isn’t the only Android tablet headed to Best Buy stores in the near future. The company has also put up a “coming soon” page for the Toshiba Tablet. For some reason the company hasn’t been able to come up with a better name for its upcoming Android tablet than that, even though Toshiba has been showing off the device since early January.

The Toshiba Tablet does have a few features which help set it apart from the crowd, including a full sized SD card slot, a user replaceable battery, and a rubberized rear panel which makes the tablet easier to grip.

Best Buy hasn’t announced a price or exact release date yet. There’s also a coming soon page at Amazon, where you can find more pictures but no more details about pricing or a release date.

This entry was posted in What's up, doc ? and tagged android, toshiba. Bookmark the permalink.