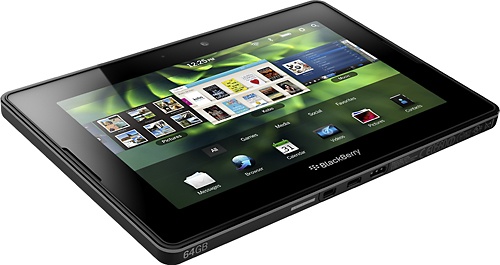 Research in Motion has announced the Blackberry Playbook will ship in the US and Canada on April 19th with prices :

The RIM BlackBerry Playbook OS is based on QNX, has fully multitasking capabilities and could run Android apps. But the tablet can’t run (smartphone) Blackberry apps !

There won’t be 3G or 4G tablet models available : for RIM, the Blackberry Playbook is a standalone tablet or a device that you use with a BlackBerry smartphone to share a mobile connection. Nevertheless, RIM is also expected to offer 4G capable versions of the tablet.

The RIM BlackBerry PlayBook 16GB model is already up for pre-order from Best Buy for $499.99.

This entry was posted in What's up, doc ? and tagged RIM Blackberry playbook. Bookmark the permalink.