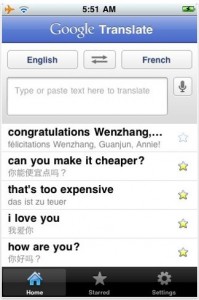 Google has just issued Google translate for Apple iPhone. Specifically, the application differs from other app in its class, letting you translate what you said it aloud, in 15 different languages. It is simply called “speak to translate”. The translation “spoken” therefore relates 15 languages, but the application recognizes and translates the written word no less than 50. As with other applications like that, it lets you hear the translation pronounced by synthesis voice.

This entry was posted in What's up, doc ? and tagged apple, google translate, iphone. Bookmark the permalink.