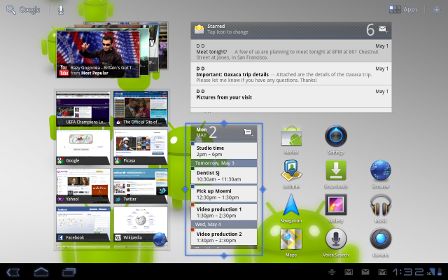 At first available for Motorola XOOM 3G today, and then be available for other tablets and Google TV — which will also add support for the Android Market and 3rd party apps.

The web browser has been updated with new Quick Controls options for viewing thumbnails of currently open tabs or for closing tabs. There’s also better support for CSS 3D and fixed positioning and support for HTML5 embedded video playback as well as support for plugins that use hardware accelerated rendering — such as the latest version of Adobe Flash Player.

The Gallery app now supports Picture Transfer Protocol for transferring photos from a camera over a USB connection.

The Calendar features larger grids and new controls in the date picker.

The Email app includes formating improvements and pre-fetches email only over WiFi, to save battery life when you’re on a 3G connection. The Email home screen widget also offers more options including the ability to flip through your Inbox, unread, or starred items.

Android 3.1 adds support for USB peripherals including keyboards, mice, and game controllers. Users will also be able to plug in a digital camera to copy pictures directly to a tablet.

You’ll be able to connect most game controllers that are designed to work with USB or Bluetooth HID, including Sony Playstation 3 and Xbox 360 controllers.

Google says developers will be able to write applications to extend support for almost any type of USB device.

This entry was posted in IT Tech stuff, What's up, doc ?. Bookmark the permalink.