You didn’t really think that a tablet which has received as much hype as the BlackBerry PlayBook would launch without somebody coming along and ripping the thing to bits and posting photos on the internet, did you? Of course not. This time the folks at Chipworks and iFixit are battling for the rights to cry of “First!” Chipworks is a firm that reverse engineers products to search for patent infringement. Meanwhile iFixit is an online computer repair community. They may come from different places, but they both have reasons to tear computers apart on a regular basis.

Chipworks reports that the tablet uses STMicroelectronics cameras, a Cypress Semiconductor touchscreen controller, and Elpida DRAM. The tablet also has a Texas Instruments processor, but we already knew that.

The iFixit teardown guide also provides a good look at the components, but also the focus is largely on showing what it takes to disassemble the tablet yourself, along with snarky play by play commentary.

Interestingly most of the components are stuck to the back of the screen instead of the back of the case, which means you can’t replace the battery without removing the logic board.

BlackBerry PlayBook gets the tear-down treatment is a post from: Liliputing 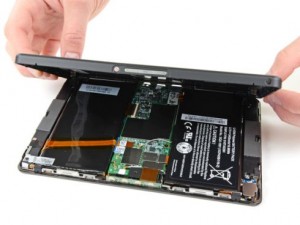 This entry was posted in What's up, doc ? and tagged blackberry, ifixit, playbook, rim, tablet. Bookmark the permalink.